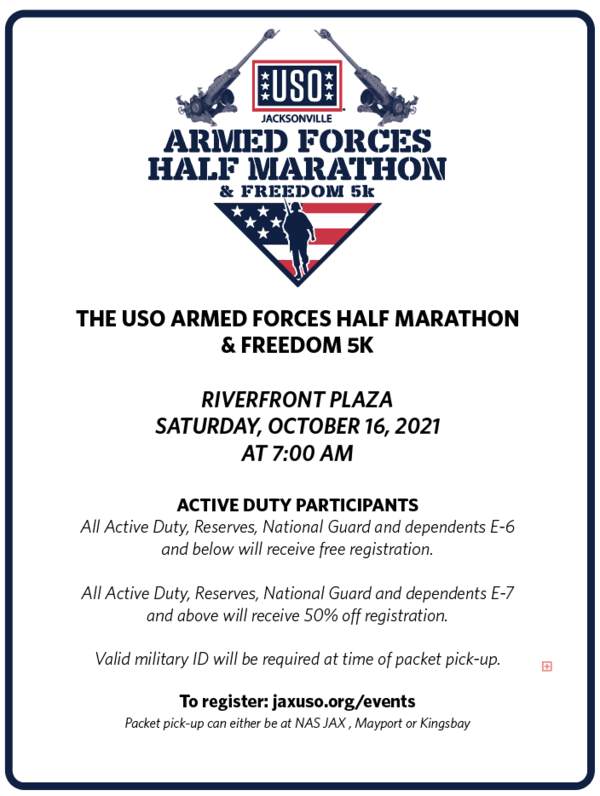 Military Packet pick up will be at Mayport, NAS JAX or Kingsbay

The 18th Annual USO Armed Forces Half Marathon and Freedom 5K will be held on Saturday, October 16th, 2021. Both races will being promptly at 7 AM. Due to the closure of Metropolitan Park, the start/finish line for this event has moved to RiverFront Plaza., just a few blocks to the west in Downtown Jacksonville, Florida. This will also be the final year for the half-marathon portion of this event as the USO transitions into the “Tri-Bridge Challenge” next year, so please come out and join us for one last race on the historic course you have come to know and love before we move forward with a whole new route for a reimagined event in 2022.

Invite your friends, families and co-workers to run this year’s race. The half-marathon and Freedom 5K run/walk will raise funds to benefit service members and their families through our programming. In the spirit of fun competition between the seven service branches of our U.S. Armed Forces, we’re asking you to support a TEAM. Whether it be Team Navy, Army, Marines, Coast Guard, Air Force, National Guard, or the new Team Space Force –join us for this race in support of our military service members right here in Jacksonville – the most military friendly city in the nation! Whether you’re an active duty service member, veteran, family member, friend or supporter, you can walk, run, and raise funds for the glory of your chosen TEAM! The branch with the most participants will win bragging rights for the next year.

The mission of the USO Armed Forces Half Marathon & Freedom 5K is to strengthen the bond between the civilian and military communities, promote sound physical health and fitness, and to raise funds for the Greater Jacksonville Area USO in support of all five branches of the military, including the Florida National Guard, and their family members.

ATTRACTIVE MEDALS TO ALL HALF MARATHON AND 5K FINISHERS

TECHNICAL RUNNING SHIRT TO ALL HALF MARATHONER AND 5K FINISHERS

GREAT MOMENTOS TO ALL ENTRANTS